A Restaurant for Vultures

In a village of Pithauli, about 100 km southwest of Kathmandu, a woman pushes a cow carcass on a cart. She then drops the carcass in the open field and runs into a hut. At the same time, dozens of vultures swoop down. In less than an hour, the carcass has been reduced to bones. 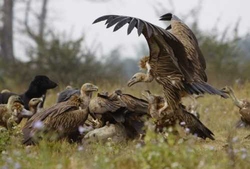 This is the most unusual restaurant where the clientele are vultures and the menu consists of only meat.  The vulture restaurant in Nepal was opened with the aim to increase the population of vulture in the area. Two decades ago, there were about 50,000 nesting pairs in the area.  Barely 500 pairs remain today. As a result, two species of vulture – the White-Rumped Vultuer and the Slender-billed Vulture are now critically endangered in Nepal, as well as in Pakistan and India.

Their steep decline is blamed on the widespread use of diclofenac, which was banned in 2006. Diclofenas is a drug that was used to treat inflammation in animals. Studies later showed that the drug caused kidney inflammation in vultures and resulted in death. The other reason for the dwindling number of vultures is their loss of habitat. The kapok trees they use for nesting is vanishing fast to meet demand from factories producing match sticks and plywood.

The vulture restaurant has become a tourist attraction in the poverty-stricken village, and admission fees from visitors, who last year numbered some 2,000, help support it. Additional help also comes from authorities, members of Critical Ecosystem Partnership Fund (CEPF) who fund this project. They buy old and sick cattle from the villagers for $3 a head, a modest income. These animals are kept on a farm in a community-run forest and offered to the birds when they die naturally since killing a cow is illegal in deeply Hindu Nepal.

Vultures are an important part of many ecosystems. They efficiently dispose of carcasses that would otherwise contaminate water supplies and possibly spread disease.  No one realize this better than the people of Pithauli, who take turns in pushing the cart every morning.