Adhyaya, a chapter of Nepali movie

The movie is divided into three chapters narrating the story of three different characters. The complicated love relationship of Raj (Karma), who is an NGO worker, and his neighbor Laxmi (Shanti Giri) is shown in the first chapter. Raj falls in love with his neighbor Laxmi whose husband is out of country, also who is no more in touch with her. Laxmi’s father is a drunkard which leads her to become a prostitute. In spite of knowing all about her, Raj is ready to accept her but could not confess his feelings because of his shyness. 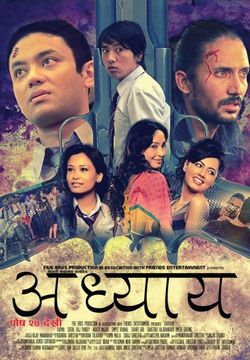 The second chapter deals with the life of a college student Jeevan (Akaash Magar) who falls in love with Simran (Swastika Rajbhandari) at first sight. Simran is an ambitious girl who is about to fly to Australia, however, she is more concerned about Jeevan. Finally, the third chapter is about Hoodlum (Sushil Raj Pandey) who unknowingly falls in love with Riya (Simple Khanal), a talkative girl who also falls for him and confesses her love towards him. Even though she confesses her love for him, he is unable to express his love for her. Do all the characters express their love and get their loved ones or they remain silent till the end of the movie? To know the answer to these questions, one must watch the movie by themselves.

Adhyaya is a movie that lacks in many aspects which could have made the movie better. The slow moving movie has some unnecessarily extended chapters that make you lose interest in it. There are also easy to guess scenes and repetitive dialogues in the movie and the slow dialogues of Karma may make you dizzy. Giri and Pandey also seem unfair to their acting. The movie, however, tries to relate with the present scenario of Nepal. The character of Laxmi represents how Nepali girls are forced into prostitution whereas Simran’s character represent Nepali youngster who is ready to move to foreign land through fake marriage. Overall, the movie is not much worthy to watch since it lacks in many aspects although it has tried to cover significant and hot issues of present Nepal.