One of the well known personalities in Nepali music industry, Adrian Pradhan is also associated with the famous Nepali band 1974 AD. Born and raised in Kalimpong, he picked up his first instruments mouthorgan and keyboard in 1989. In the same year, he also gave the first stage performance and in 1994, he came to Nepal at the age of 24 years and since then, there has been no looking back. A full time musician and singer, Adrian has been able to manage his solo career as well as singing with one of the legendary bands 1974 AD. 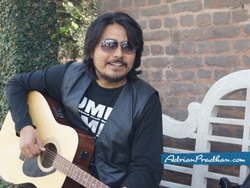 The band, 1974 AD was started in 1994 and released their first album ‘samjhi baschu’ in 1998. Among the various songs this legendary band has given to the Nepali music lovers, the song closest to the band is Sambodhan. Adrian decided to go solo to have a different identity and to experiment singing in freer manner than being a drummer and singer, he was in the band. He also wanted to try some different style of singing as well as to make some money. Although the band mostly played rock music, he plays more ballads or a fusion of rock and aadhunik pan (modern). Their hit song Sambodhan (which is a tribute) was initially written by him as a tribute to his late music teacher Chandra Mohan Ghising from St. Augustine’s Kalimpong, however, the band decided on using it to make the video for the late king Birendra and the music video was made as a tribute to late King. Among his various songs, he has dedicated his song Mutu Bhari Bhari to his fans, friends and families. He is satisfied with what he has got and is happy to be loved by so many people. He has released three solo albums apart from the band. He, along with his band, is also the youth ambassador for Save the Children and does east to west Nepal tour to promote primary education for the underprivileged children. The other members of the band are Manoj, Nirakar and Sanjay.

[youtube]http://www.youtube.com/watch?v=lb77E2Uk4dg[/youtube] Adrian Pradhan, along with his band 1974 AD, has not only performed all over Nepal but has also gone to various other countries for performance and concerts. Involved with one of the legendary bands of Nepal, he is the drummer as well as the singer of the band.