Amala is one of the healthiest and ‘rich with vitamin’ fruits. There are two types of amala in Nepal that are the plain amala and the pani amala (water amala). These two are different in terms of size and appearance. This juicy fruit is considered to be good for blood circulation, eyes, skin as well as hair. Usually eating one amala a day is considered a healthy habit.

Found mostly in the Terai area of Nepal, amala plant is also worshiped as Lord Vishnu in the country. Also, during the month of Mangsir, people have picnic under the amala tree as it is considered to be auspicious. Moreover, on ‘Tulasi Bibaha’, the symbolical wedding of Tulasi plant with amala plant is conducted, symbolizing the marriage of Lord Vishnu and Goddess Laxmi. Hence, the fruit not only have health benefits but is also important in terms of religion in Nepal. 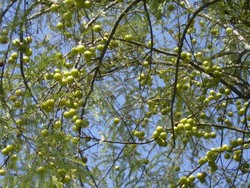 Amala is also considered as a fruit with high value in Ayurveda. Most of the Ayurvedic medicines use amala in it and also the popular Ramdev baba’s products have special products like amlaka murrabba and amalaka juice with  amala as a key ingredient in this and most of the other products. This fruit is also mixed with other ingredients to make a ‘pachak’ that helps in digestion of the food. It is also used in most of the herbal shampoo as it is considered to be good for hair and not only shampoo but also the amala hair oil is popular for shiny and black hair.

Amala is found in almost every house in the Terai region of Nepal. It is usually planted at the front compound ‘aangan’ of the house. Also, amala is a common plant in the temples, especially in Hanuman and Vishnu temples. The devotees tie sacred threads on its trunk and ask wishes. They also offer yellow sacred powder ‘kesari’ and yellow flowers to the amala tree. Amala is also used for variouspurposes in the kitchen. It is made into murabba (dried amala skin mixed with spices and used as titaura), khatimiti (sour and sweet amala pickle), amilo achar (however, not so common, sour amala pickle) and amala chyawanprash (a paste like bottled medicine for increasing immunity power, especially used during winters to beat the effects of cold).