Born to Bishnu Bishwakarma and Mana Maya Bishwakarma in the year 1977 in Terathum, Anju Panta started her singing career with a bhajan, Manuwa manmai yogi banau. Later, in the year 1998, she entered and won the Nationwide Modern Song Competition organized by Radio Nepal after which there was no looking back in her life as she had realized that her real passion lay in singing.

She did many stage shows and the song that brought her to notice was from the album ‘Kampan‘, a remake of original Nepali hits, for which she even got applaud from music critics for her wonderful voice, projection and pronunciation in the song. She remained at top of the chart for many weeks for lending her voice in remake of the songs like Maitighar and Reli Khola Bagara. Kina udyo pankhi mana, a song from the movie Bagar became the one which introduced her into the world of playback singing. 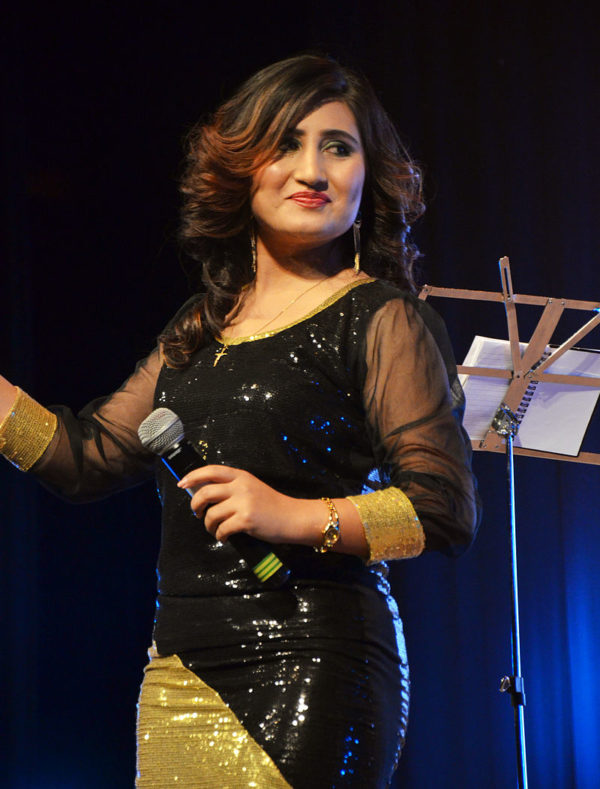 Panta performing in Sydney in 2014

She has become one of the most popular singers of Nepal who has also tried her luck successfully in playback singing. She has lent her voice in some of the popular songs like the title song of Ma Timi Bina Marihaalchhu, Bhun bhun bolyo bhamara of Saput, Dil yo mero dil of Kismat and Sustari sustari mannma for Darr. However, her most popular song was Na birse timilai nap aye timilai which was played not only in radios and FMs but also restaurants, micro buses, buses, tempos and even shops. She has done playback singing for more than 18 films and has sung more than 100 Nepali songs both in solo and duets.

Always surrounded by one or more people, she enjoys the company of her husband, who she married in the year 2002, and her daughter. She met her husband at a singing competition where both of them had participated and after courting her for five years, he was successful to woo her. However, she has split over with her husband Manoj Raj Siwakoti who also happens to be a popular modern and classical singer of Nepal. She enjoys playing loud music at home on her day offs. This fun and happy-go-lucky type person was a shy child until she began singing. She enjoys music in different languages from Newari to Tamil and has especial interest in Tamang bhasa. As a daughter of Tamang mother, she grew interested in the language and desires to sing in the language as well. She has also sung Newari songs, Tharu song and some lok–dohoris (folk songs).

Her favorite memory of childhood is of her visit to Debatathan with her siblings and chasing after pigeons. She used to sing ‘pohor saal khusi phatda’ by Aruna Lama and ‘naam gum jaega’ by Lata Mangeshkar as a child. She had learnt the aaroha, avaroha and alap of music from the late Bhajan Shiromani Krishnaman Dangol.

Anju Panta won many titles including Best Female Vocal Performance and Best Record of the Year for her song ‘na birse timilai‘ at 13th Close Up Hits FM Music Award in December 2009. Her song has also been in the Top ten lists of Republica Smash Hits and she has also received some of the renowned awards like Chhinnalata Puraskar and Kantipur FM Music Awards for Best Female Vocal Performance.

The singer is also active in social service and development through Anju Panta Foundation. She is also keen to open up a music school, company and a studio in future and wishes to block all the problems of bandhs, strike and violence. One of the most popular singers of Nepal in the modern time, her song ‘nabirse timilai’ had ruled all over Nepal for many weeks staying on the top of the charts.