Established in 1992, Nepal’s largest protected area Annapurna Conservation Area (ACA) contains some of the world’s highest peaks and the world’s deepest valley, the Kali Gandaki River Valley. The proposed conservation area includes the Annapurna Range in western Nepal, and it is bounded by the dry alpine deserts of Mustang and Tibet (China) to the north, Kali Gandaki River to the west, the Marsyandi Valley to the east and valleys and foothills on the south.

The Annapurna Conservation Area Project (ACAP) was implemented as a pilot project covering one VDC with area of 200km2 by MTNC in the year 1986 and its work area had expanded to 16 VDCs with an area of 1500km2 by the year 1990. ACA was gazetted officially in 1992 covering 55 VDCs with its present area. 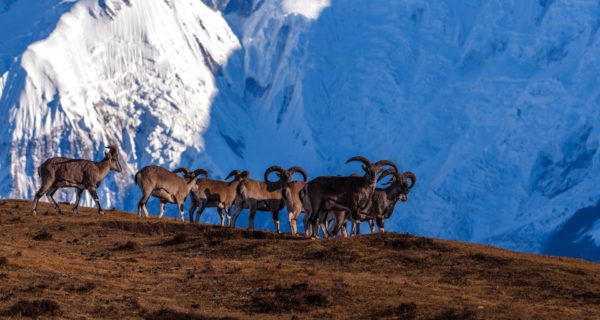 ACAP has three primary objectives that are to conserve the natural resources of the ACA for the benefit of the present and future generations, to bring sustainable social and economic development to the local people and to develop tourism in such a way that it will have a minimum negative environmental impact.

ACA could be accessed by road from the nearest town Pokhara and then from Nandanda, one has to walk on foot. It has various species of biodiversity from sub tropical Sal forest to permanent snow harboring 22 different forest types with 1226 plants species including 38 orchid species and nine rhododendron species along with around 100 mammals and more than 400 species of birds. Some of the rare plant and animal species are accommodated in the ACA. It also houses some of the world’s highest peaks like Annapurna and Fishtail Mountain are present here along with the world’s deepest gorge Kali Gandaki and also the world’s highest altitude lake Tilicho. It is also one of the most popular tourist destinations of Nepal with thousands of trekkers trekking to the place every year. There are two different climatic regions in the area within a span of 120km and an altitude of 1000-8000m.

There are more than 100,000 inhabitants and more than 10 ethnic groups from Tibeto Burman groups of Gurung, Thakali, Bhotia, Magar, to Indo Aryan Brahmin, Kshetriya, Kami, Dami and Sarki living in and around the area. The area is rich in cultural and natural heritage with beautiful white snowcapped mountains and the green forests making the area enchanting and also one of the must-visit places in Nepal.