Apabad is a story of a young college boy Suyog who dreams of becoming a novel writer but being a student of business and under pressure of his father and friends, is forced to find a job in bank. But his strong desire and determination of becoming a writer makes him oppose his father’s dream of making him a banker. When he tries to go to UK for further studies, he finds out that the college he enrolled was one of the blacklisted colleges. Frustrated with his life and the events, he tries attempting suicide and jumps off a bridge into a river but he is taken to an island where there are no humans present. Miles away from the crowd and technology, he is alone to do whatever he wants. 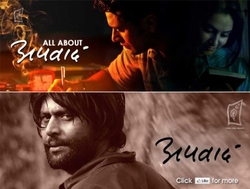 The movie is highly inspired by the English movie Cast Away. The producer, and also the cinematographer of the movie Sushan Prajapati, has done a good work in the movie. It also has good music and the work of the debut music director Ujjwal Meghi Gurung is praise worthy. As a debut direction by Subash Koirala, the movie is good in terms of presentation. One of the major reasons for the movie being popular among the people was that the movie touches the aspect of the traditional thoughts of career and study and also addresses the issues of the roles and responsibilities of the parents towards children and vice versa.

The performance by Raj Bhallav Koirala as Suyog is appreciable and also Nisha Adhikari has done justice to her simple character of Sunanda, Suyog’s friend and one-sided love. Rabi Giri as the father has done a good job as well. However, they lack heavily in showcasing the emotion on their faces. Although it has been inspired by Cast Away and most of the scenes on the movie might seem copied, Apabad as an effort of a new creative team is worth a watch.

The movie was released in various parts of United States and United Kingdom before releasing it in Nepal.