One of the most prominent young generation Nepali poets and novelists, Buddhisagar writes in a way that the words in his creations reflect accuracy in expression, his love for Nepali language and his temperament full of creativity. He has penned not only a critically acclaimed poem collection ‘Hajarau Prithvi Hajarau Akash’ but has also recently entered into the world of novel writing with his first novel Karnali Blues.

This Nepali wordsmith became what he always dreamt of being – a writer. Inspired by the works of Haruki Murakami and Paulo Coelho, he always loved reading books. He had an interest in literature since childhood and he had even attempted to write a detective novel as a child. Born in Kailali district in far western Nepal, his childhood was spent at Matera village while he spent his teenage at Manma in Kalikot. An avid reader since childhood, he believes that no book is good or bad as every book gives us something to learn. 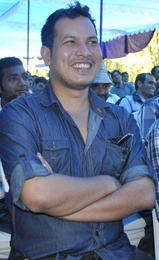 His first novel Karnali Blues received huge response from the reader as it was one of the highest best sellers in Nepal. The book not only earned him good royalty but also earned him instant name and fame. He is now known more as the author of Karnali Blues than simply a poet. Already an outstanding poet, Buddhisagar is an aspiring young Nepali novelist as well.

A shy person by nature, publication of his book has helped him overcome his shyness as now he has to respond to his fans and critics. He remembers an incident while he was in grade 10. He used to write fiction for radio and one day, a girl from Bardia wrote him a letter providing him feedback and support for his work but he could never muster up enough courage to write her back. And also her being way too old than him, made him think it was better that way.

Besides reading, he enjoys watching movies (he is choosy when it comes to movies), listening music and travelling. He desires to travel to Mansarovar and the desert in Kazakhstan. And, although he used to be a party guy, his work and novels have kept him away from parties apart from some occasional celebrations.

He has also received gold medal in National Poetry Festival in 2060 BS, and received Pratibha Puraskar by the government of Nepal in 2066 BS. One of the aspiring young Nepali novelists, there is a lot to come from the creative mind of Buddhisagar for the readers of Nepali literature in near future.