Situated in the Baglung district in far western region in Nepal, the temple of Baglung Kali Bhagawati is one of the famous temples in Nepal. Also known as Kalika Bhagawati temple, it is one of the most religiously significant places located deep inside the dense forest just above the northern side of Kali Gandaki.

Kali is one of the most powerful and dangerous form of the Hindu goddess Durga and is often associated with the power, Shakti. Goddess Kali also means ‘the black one’. She is considered Kali, consort of Lord Shiva which also means time or death as Lord Shiva is often considered as ‘Kala‘, the eternal time. She is the prime goddess of the Dasa Mahavidyas, ten fierce goddesses of Tantra or the Tantric goddesses. Besides this, Kali is strongly associated with Shiva and Shaivas derive the masculine Kala (a form of Shiva) from her feminine name. 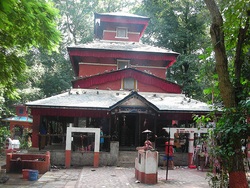 The temple of Baglung Kali was built by Pratap Narayan and was renovated in late 1990s. There are various other small temples like that of Lord Shiva, Radha Krishna, Laxmi Narayan, etc. inside the Baglung Bhagwati temple. Every year, thousands of religious pilgrims from all over the world come to visit the temple. Not only the normal Hindu devotees, but also Tantrics from all over the world come to the temple to get Siddhi (knowledge) on their field of interest. Also, marriage is conducted inside the temple with a belief that their married life will be blessed with every kind of happiness. During the festival of Navaratri/Nauratha, the temple is crowded with devotees coming from every corner of Nepal to celebrate the festival there. People also come here to perform puja to get victory over their enemies, win legal suits, win the heart of their beloved and protection from black magic.

It is said that the goddess fulfills the wishes of the devotees if they could please her. She is also known as Bhavatarini literally meaning ‘rescuer of the universe’.