Paneer is one of the most popular vegetarian dishes that are used during special occasions and parties. It is not only loved by vegetarians but also by the non-vegetarians. It is a special dish used to make many varieties of cuisines, some of royal tastes as well. Among the various, Baishnav Paneer (Purely vegetarian Paneer) is one. Baishnav are the followers of Baishnavism which is pretty strict when it comes to food habit and considers the use of onion and garlic as impure food items.

One of the methods of making Baishnav Paneer is given below:

A pinch of jimmu 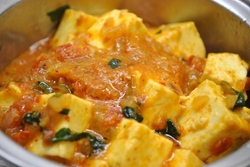 First of all, take a pan and heat oil in it. When the oil is heated, add paneer pieces and fry until it turns golden brown but make sure not to burn it. When done, remove it from heat and reserve it in a plate for later.

In another pan, put some water to boil and add cloves, cinnamon and cardamom to it. When the water is boiled, pour the water to into the vegetable and mix well. Let it simmer until the desired consistency of the gravy is achieved. Garnish it with the chopped coriander leaves and serve with steamed rice or roti.