Balidan, sacrifice for the country

Directed by one of the most successful Nepali movie director Tulsi Ghimire, the movie Balidan is one of the successful movies of its time. Balidan means ‘sacrifice’ and the story of the movie is also based on patriotic content. The originality of the story and it being based on the people’s movement for democracy was also one of the many reasons for its success. The story being related to the Nepali society and also a democratic storyline made it different than most of the other Nepali movies, especially of that time, so, the movie was loved by mass as well. 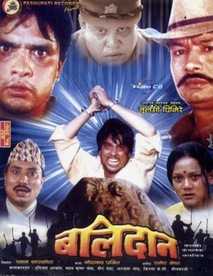 The story describes the Nepali society and its politics. It is about the people’s democratic fight against the Panchayat System that prevailed in Nepal during the period of King Mahendra. It describes the struggle and problems that the people of Nepal had to go through to bring democracy in the country. The movie starred some of the well known and veteran actors like Nir Shah, Haribansa Acharya, Madan Krishna Shrestha and Ram Krishna Bamjan in the lead roles. The movie also gives message to the people to fight against injustice. It encourages people, especially the young generation, to understand and take up their roles and responsibilities towards their country. It also emphasizes on the power of unity among the people to change the world. This social and realistic movie is one of those that encourage the viewers to take a stand against injustice. The movie tries to mirror the social issues of the Nepali society and its purpose is not to merely entertain the viewers but to make them realize and understand their responsibilities towards the society, nation and the world. As the name suggests, the main theme of the movie is to sacrifice your selfishness for the sake of your country.

It is a good movie to catch up if you are willing to get a glimpse of what surpassed among the people of Nepal during the democratic movement. The DVDs of the movie are available on the market or you could also find it online.