BAWS for the rights and safety of stray dogs

A professional non-government, non-profit organization working for the benefit, safety, protection and welfare of animals and birds in the city of Bhaktapur is Bhaktapur Animal Welfare Society, commonly known as BAWS. Established under the Social Organization Registration Act 2034, in April 2011, BAWS was formed by a group of young professional veterinary doctors and animal lovers teamed up with the same goal of helping the miserable the animals, especially the stray dogs. A group of technical experts who initially did the treatment of the stray animals on ad hoc basis in Suryabinayak were motivated to setup a systematic way for doing their work and that resulted into the existence of BAWS.

It has a board responsible for promoting mission of BAWS and playing a major role in fundraising for smooth functioning of the organization. The board is represented by distinguished members from within and outside of Bhaktapur. This society started off with a vision of setting a clean, non-violent, safe and healthy environment where human and animals would live in a friendly manner. 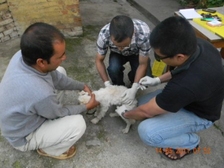 Its mission is to initiate the welfare of animals using the animals as per their capability without violating their right thereby, improving socio-economic development of the people and creating a safe and friendly setting for both human and animals.

The objectives of the project are to control the dog population by neutering them, vaccinating the neutered dogs, tagging or marking the neutered and vaccinated dogs and creating awareness in community about keeping street dogs healthy.

It works for ensuring the five freedoms of animals that are, freedom from hunger and thirst, freedom from discomfort, freedom from pain, injury or disease, freedom to express normal behavior and the freedom from fear and distress. The methods it uses for performing its work is divided into six steps or phases. The first one is catching the animals, then they are taken to shelter or their kennels, next is the identification process of the animals where they are given a particular identity, fourth is the operation performed on the animals, after that, they are given vaccinations. And lastly, raising awareness among the people regarding the need of catching and protecting the street animal is done.

Interested people can help the organization in four different ways, which are: giving donation, sponsoring a dog, becoming a member or aiding as a volunteer.

Giving Rs 50 to the organization can provide 1 meal for a dog while Rs 150 can provide Anti Rabies Vaccination it. Rs 500 will provide treatment for a diseased dog, similarly, Rs 2500 will provide family planning to a dog. These are some of the ways to help these dogs financially.