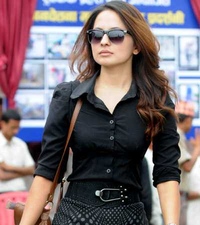 On July 19, 1981 in Bansbari, Kathmandu, a stunning beauty was born. She was named Malvika Subba.

Before Malvika finished her university from Tribhuvan University with Masters in Mass Communication and Journalism, she decided to compete for the Miss Nepal 2002. Then, at the age of 21, Malvika won this much coveted title. Ever since, she has been working as a TV host in ‘Call Kantipur’ which is aired on Kantipur Television.

2008 was a landmark year for Malvika Subba. It was then that she worked in Voice of India  and MTV EXIT as the Ambassador for Human Trafficking. She also acted in movies like God Lives in The Himalayas and Good Bye Kathmandu.

Malvika Subba has also been assoicated with Youth Spokesperson for Action Aid’s Hunger Free Campaign, HIV/AIDS Youth Leader by UNICEF. She also worked with Shangrila Housing as Sales and Marketing Manager from 2009 to 2011. Since April 2011, she has been working as the editor for Navyaata Magazine. Currently, she is working as the Co-Founder and Creative Director of House of Alternative Apparel and the Himalayan Climate Initiative.

Malvika Subba is an actress, a social activist, an entrepreneur, a television host, a media personality and a beauty queen. In short, she is a really versatile woman whom the country is proud to have.