The highest peak in the Mansiri or the Manaslu Himal Range, Ngadi Chuli stands proudly at the height of 7871m. Also known as Gurkha Massif in Nepal, the peak has many names like Peak 29, Dakura, Dakum and Dunapurna. This beautiful mountain is bordered by Manaslu Himal in the northern side and it has Himalchuli, also known as Himchuli as the southern border. 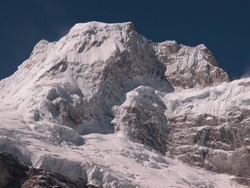 The first exploration by the Japanese climbers took place in 1961 and they attempted it for the third time in 1969 when they reached up to 7350m. In the year 1978, three Japanese climbers died during the seventh attempt. It has only been climbed once or twice of which the first ascend probably took place in 1970 by Hiroshi Watanabe and Sherpa Lhaksa Tsering, members of a Japanese team who climbed the East Ridge and the face. However, they suffered a fatal fall down and lost their life to the difficult weather and treacherous storm. They only reached about 7500m and the film rolls found with them showed no evidence of them climbing the summit. In order to confirm their ascent to the summit, the Japanese organized three more climbs but they all went in vain as none of them succeeded. The first confirmed ascent took place in the year 2005 and the last attempt was in 1979 by the Polish climbers Ryszard Gajewski and Maciej Pawlikowski through the west support.

The best time of the year for the climb is April and May when the weather is clearer and there are less chances of storms or fatal fall. The mountain looks even more beautiful when the weather is clear. The nearest major airport from the mountain is Kathmandu, however, the convenient center from it is the lake city Pokhara. This beautiful mountain has not been climbed many times and is awaiting the enthusiast climbers to ascend it.