Situated about six km south-east from Banepa, the beautiful village of Panauti is located between Punyemati and Roshi Khola. It is said that the then king Ananda Deva installed four dikapalas (guardian deities) in four directions and founded Panauti by uniting the then scattered small villages with seven hundred people in Kaligat in the year 4197 (1006 AD). The local people believe that the Basuki Naga (serpent deity) has occupied the area of Panauti to protect them from evils and keep them safe. Hence, people are not allowed to use dhiki as the sound might disturb the sleep of the deity. It is also believed that the village itself rests upon one which is why not a single house was broke or dismantled during the great earthquake in 1990 BS (1925 AD). It is also one of the very important trade centers lying next to Banepa as it lies in a small valley surrounded by the villages. However, most of the people here are involved into farming. 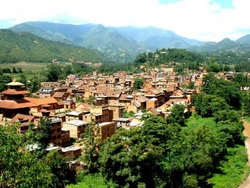 Panauti is also famous for the art gallery of beautiful and fine idols, woodcarving in the temple struts, doors and windows of the temples and monasteries. It is also considered as a holy place and in every twelve years, a great fair known as Makar Mela, commonly known as Panauti Mela, is conducted here for a whole month of Magh at Triveni Ghat where several artistic stone idols are places in temples as well as open areas for exhibition and worship. Moreover, a chariot festival of Nama–Buddha is held here every year and according to the legend Mahasatva who later became Nama Buddha was the prince of Panauti.

Another major attraction is the temple of Indresvar Mahadev. It is also mentioned that Sri Viramadevi, princes of Bhota (Banepa) dynasty built Aindrakuta (Indresvar temple) in Nepal Sambat 414. It is said that on the occasion of Janai Purnima, various gods and goddesses come to Panauti in human disguise to observe the glorious chariot festival of Bhadrakali, Bhairab and Indresvar Mahadev.

Although Panauti is a small village development committee on the outskirts of the Kathmandu valley, it is also important in terms of natural as well as rich cultural and religious heritage of Nepal.