Bhai Tika is one of the most important Hindu festivals for brothers and sisters. It falls on the last day (fifth day) of Tihar and is also known as Bhai Tihar and Bhai Dujh (among Madhesi communities). This festival celebrates the bond between brother and their sister. During this, the sisters worship and pray for to Lord Yama (Lord of Death), wishing for long and prosperous life of their brothers.

Legends have it that once a girl named Yamuna, whose brother was ill, prayed for his long and healthy life and when Yama, the god of death, had come to take her brother with him, she pleaded for some time to worship him (her brother). Yama granted her the wish, after which she performed a long ceremony for her brother and Yama. He was very pleased with hr and promised her not take her brother’s soul until the offerings of turf grass and the flowers remained fresh and unwilted. As the flowers and the turf grass had remained unwilted and fresh till the next Bhai Tika, Yama granted the boy a long time. Since then, the festival has been performed by the sisters for the long and healthy life of their brothers. 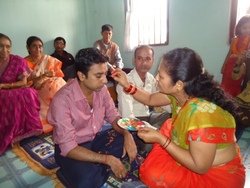 On this occasion, a special sagun (a packet of masala) is given to the brothers. This tradition is said to have started as a caring sister’s healthy snack pack for her brother to make his way back home, as the brothers in the past had to walk long way to their sister’s home (after marriage) for the festival. This festival is usually celebrated at sister’s marital home or her husband’s home after marriage. Some sisters also give cloth pieces along with the masala and the main items used for the worship are the turf grass, marigold flower and makhamali flower that are said to remain fresh for a long time.

First, the sisters worship the diyo, kalash, Ganesh that they have set up in a nanglo and then make a border around their brothers (who are seated on the floor) first with oil and then, water to keep away bad omens. Then they worship the bimiro which is on the outside of the door and after that, they break a whole walnut kept beside the bimiro with a lohora (one of the part of stone grinder) and shut the door. This ritual is believed to be observed to keep Yama out of the room and away from the brothers. After that, the brothers are worshipped and the colorful, usually rainbow colored, tika is put on their forehead. They are then, adorned with the flower garland and sometimes, a garland of turf grass is also made and if that is not possible, a bunch of turf grass is place on their head, ear or included in the garland. Finally, the masala and the gift is given and the puts tika on their forehead brothers touch their sister’s feet and give them gifts, usually cash or clothes. Then the brothers are fed before sending them back home with the masala and other gifts. If the brothers and sister have home close to each other’s then, usually the sister takes the masala to the brother’s home or send someone to do it.