The second biggest city of Nepal, Biratnagar is located near the south-eastern border to India. It is famous for industry, commerce and agriculture in Nepal as most of the manufacturing industries are located in this region. Rather than being a destination, it is visited more like a transit point before beginning a trek to the mountains of Kanchanjunga or visiting the tea states of Nepal like Illam and Dhankuta. 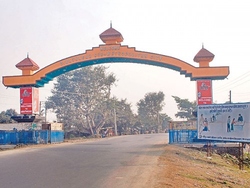 Although the city is big, the area is mostly occupied by industries and residents and there is not much to see within the city except for the open market that takes place every Wednesday in the eastern side of the city. Also, the Kali temple in the middle of Biratnagar market area is famous. There are few temples of the Hindu gods and goddesses and also some fortune tellers of the area are famous. Many people come to the place to show their china (birth chart) to these people to known about their future before they start a new venture.

Biratnagar is also connected to the India border in Jogmani which makes it an ideal place for shopping to the people living within and few kilometers away from the city. Many people living in the eastern region come to the place on a shopping spree. About a ninety kilometer drive from Biratnagar takes you to Koshi Tappu Wildlife Reserve and also the famous Koshi Barrage on the river Koshi is a sight to see. This area also serves as a picnic spots for the people living around the nearby towns. About two kilometers away from the Koshi River is the famous temple of goddess Kankalini where buffalo sacrifices take place every year during the eighth day of Dashain. Biratnagar also serves as an air route hub as the people going to Dharan, Rajbiraj, Dhankuta, etc. fly here from Kathmandu and board a bus or a micro bus. Moreover, an hour’s scenic drive away from Biratnagar takes you to the holy Hindu pilgrimage of Baraha Chhetra. This famous site is situated at the confluence of Koka and Sapta Koshi rivers.

You can reach Biratnagar by a 40 minutes flight from Kathmandu or board an eight hour (overnight) bus at the bus station in Kathmandu.