Soya chunk, commonly known as neutrela is hard ball like food item that turns into a soft and spongy ball after it is soaked in water. Fried soybean has soft and crunchy taste. There are various ways to serve neutrela or soya chunk. Among the many, making pickles that could be stored in a bottle for a longtime is also one. The process is short and easy and the absence of added preservatives and artificial flavorings make it better health option as well. 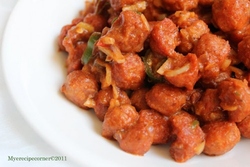 First of all, take a bowl and pour 1 kg soya chunk in it. Now, add water and let it soak for a while. After it is soaked, wash the chunk and chop it into four halves. Then, take a pan and put it to heat on the gas stove. After the pan is heated, pour the mustard oil in it. Put the onion in it when the oil heats and fry it. A little later, when the onion turns brown, add soya chunk in it and fry them. Now, add green chili as per your taste. After a while, add a little mustard powder and salt (to taste as someone might like extra salt and someone might need less). The chunk turns brown when it is cooked. Now let it cool for a while. Add some amchur powder (raw mango powder) to it and mix it well when it is cold. After a while, oil starts to come out of the achar (pickle) and when that happens, put the achar in the bottle.

In this way, you can store the pickle for a longer period of time and can enjoy it with your meals whenever you want. So, when are you trying it?