A privately operated air travel company in Nepal, Buddha Air Pvt. Ltd. was founded on 23 April, 1996, registered as a private limited company at the Company Registrar Office of the Ministry of Industry, Government of Nepal under the Company Act 2021 BS of Nepal. Although its company headquarter is located at Jawalakhel, Lalitpur, there are other sales offices around the Kathmandu valley as well as the country.

The airlines had been serving for over a decade now with more than 100,000 flight hours logged in with over 3 million passengers flown to nine destinations with permanent runways in the country. It has been successful to establish itself as the largest domestic air travel operator in Nepal and provides employment to more than five hundred experienced professionals. The company has four eighteen seat Beechcraft-1900 D, three forty-seven seat ATR-42 and one 72 seat ATR 72-500 flying out to all the routes with a minimum of 1200 m of permanent runway.

Prioritizing safety as its first concern, the company has also been successful to grab many awards including the Highest Safety Award given by the Ministry of Tourism and Civil Aviation of the Government of Nepal as well as has a list of most valued clientele in Nepal including most United Nations Organizations, all major diplomatic missions, international non-government organizations as well as national level organizations. On 27 September, 2004, it was honored by the Ministry of Culture, Tourism and Civil Aviation for being the first private sector airlines in foreign exchange earnings during the fiscal year of 2060/61 BS. 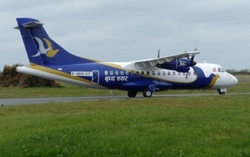 Each aircraft of the Buddha Air is equipped with navigational aid equipment and flights are only operated in airports with asphalt runway of not less than 4000 ft length. The fully trained maintenance and engineering staffs include 45 cockpit crew, 5 flight operation officers, 18 qualified engineers and 31 technicians. The company sends its pilots and engineers directly to the manufacturing companies for the ATR and Beech craft training for regular training programs and also each of the aircraft is checked thoroughly before takeoff and after every landing.

The various destinations connected to Kathmandu through Buddha Air are Bhadrapur, Bhairahawa, Bharatpur, Biratnagar, Dhangadi, Janakpur, Nepalgunj, Pokhara and Pipara Simara. There are regular flights taking off from Kathmandu to these destinations every day. For further information, you can log on to its official website www.buddhaair.com