Every stupa (Buddhist shrine) in Nepal, there are giant pairs of eyes staring out from the four sides of the main tower.

These are Buddha Eyes (also known as Wisdom Eyes), and they look out in the four directions to symbolize the omniscience (all-seeing) of a Buddha.

The Buddha eyes can be seen throughout the country and they have become a symbol of Nepal itself. 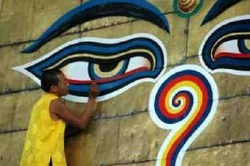 Between the Buddha’s eyes where the nose would be is a curly symbol that looks like question mark.

This is the Nepali character for the number 1, which symbolizes unity of all the things as well as the one way to reach enlightenment—through the Buddha’s teachings.

Above this is a third eye, symbolizing the all-seeing wisdom of the Buddha.