Ever wondered where the white butterflies came from to the dilapidated parts of the Kathmandu valley? How those old, once magnificent trees, remains of buildings, etc. got covered by these white and pristine paper butterflies? Well, it all started with an initiative of a young artist Milan Rai, known as the butterfly man, who started the social initiative of ‘The Butterfly City’ in Kathmandu. He uses white butterflies for his installation piece as a symbol of pure transformation and hope. With a belief that every individual has a power to transform like a butterfly and when this transformation happens collectively something miraculous happens, he uses the white butterflies to transform something mundane like an old dilapidated and forgotten spot in the city into something vibrant. This spot varies from broken and time battered cross-ways, a fragmentary wall, and a busy street to a tree stalk along a pavement.

It started when a butterfly landed on his paint brush and another on his iPad. He was struck by the transformative powers of the butterflies. He thought that the way it transformed his state of being with just a flutter of its wings, it could also transform the dusty and dirty Kathmandu.  This is how it inspired him and he started to create a butterfly street which later expanded into a dream of butterfly city. He wants his butterflies to travel around the world spreading the message of hope, one’s power to transform themselves and their surrounding and create a butterfly world which is aware and ready to tap into its inner power and lift itself from the daily drudgery. He has stood up alone to install his butterflies all over the capital.

It was in the remains of a once magnificent tree in Naxal that the very first butterfly was installed. Although a lot of people seemed to admire it, he couldn’t find it the next time he passed through the place. However, instead of feeling angry, he became hopeful that the butterflies fluttered into the city spreading the message of hope. 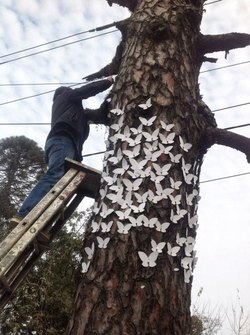 His white butterflies are pristine signifying purity and symbolizing a blank slate, a space where you could write your hopes, dreams and aspirations and send them out into the universe. His butterflies are travelling to the United Kingdom for art exhibition on the 22December, 2012 and he has also received emails from other parts of the world to send his butterflies there to transform their spaces.

Even though he knows there is little hope for the city with its current state, he is encourages the people to imagine a world of hope, city of joy and prosperity, a butterfly city. Although the white butterflies will not make your life easier, pay your bills, do your chores or save your time and energy, it will affect you and make you stop and wonder.