Located at about fifteen kilometers west of the district headquarters of Ilam, Siddhithumka is one of the best tourist destinations of Nepal in the western part of Ilam. This VDC is bordered by Soyak in the east, Jitpur in the west, Jitpur and Sangrumba in the north and Mahamai, Danabari and Mai River in the south. Situated at an altitude of 272 m to 1710 m from the sea level, this VDC has the Siddhithumka peak, located in its southeast, as a major tourist destination. The peak is famous for the goddess worship and also the captivating view of the sunrise and sunset. Apart from this, other attractions of the place are Ajambare hill, Khandrung cave, water mill, bee keeping, flower garden, Mai River, Sal forest and other trees along with the various caste and ethnic groups like Limbu, Rai, Tamang, Magar, Gorkhe and the Fulbari Jhilke.

The view from the Siddhithumka peak is captivating as you can see not only the villages in Ilam but also the neighboring districts of Jhapa, Sunsari and Morang along with the wonderful sights of Darjeeling and Sikkim of India. Also the Chure region can be seen from here and it is not the limit. Along with the view of various other beautiful villages, you can also enjoy the sight of the third highest peak of the world, Kanchenjunga as well as the highest peak of the world, Mount Everest. 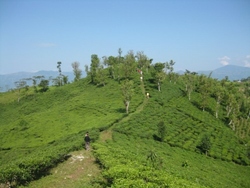 Around 1983, the area was covered densely by the Bet plant that later bloomed and had tendrils which is said to have given the name to the place. The name Siddhithumka originally came from the Limbu word Shree Furka where Shree meant ‘Bet’ and Furka meant ‘the place where bet blooms’. The name Shree Furka gradually changed to Siddhithumka. Some also believe that the presence of the Siddhidevi hill in the place gave way to its name. Similarly, the Limbu community states that the name is a developed form of Siri which meant ‘power’ and Kokma which meant powerful hill.

Siddhithumka peak is an ideal place to view sunrise as the early morning rays of the sun falling on the Kanchenjunga Mountainmake it look silvery just like it does in a beautiful moonlight night. Even the sun seems to change its shape from cucumber to sea wave and for about 10 to 20 minutes, the bubble-bees are seen to be flying around a large stone at the peak.