Nepal is rich in diversity, be it religious, cultural, linguistic or ethnic. Caste system refers to the stratification of human on the basis of religious and cultural beliefs. It is connected to the Hindu philosophy and is found in the Hindu community mostly in Nepal and some parts of India. It is extremely prevalent in Nepal. 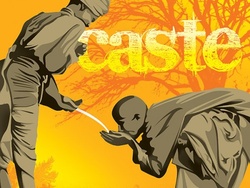 The caste system is an endogamous unit when it comes to marriage. Those born in certain caste group are bound by occupational restrictions. The Brahmins are responsible for conducting religious sermons and pujas. The Khastriyas has the responsibility of providing protection to all the groups. The Baisyas are the businessmen and the Sudras are responsible for all the lower level works like shoe making, cleaning toilets, and disposing of carcasses of the dead animals.

In Nepal, the caste system was strengthened by the then King Jayasthiti Malla during the Malla period. During the period of Jung Bahadur Rana (the first Rana Prime Minister) Muluki Ain (Country Law), 1854 incorporated all the Non-Hindus groups under the caste system.

The caste system was stratified in following way:

Tagadhari or the thread wearing group is considered as the highest group. The Brahmins and the Chhetri (Khastriya) falls on this group.

Matwali is the alchohol drinking group. It is further divided into Numerine, the higher group and Marine – the lower. Newars, Rais and Limbu fall on the Numarine category while Majhi, Chepang, Kumal, Danuwar, etc. are in Marine. Numarines are economically strong and cannot be kept as slave while Marines are kept as slaves due to economic backwardness.

Pani Nachalne- Choichito halnunaparne are the types whose physical touch is not considered impure but if they touch the water or food it is regarded as uneatable. The Muslim, Teli and other non-Hindus fall in this category.

Pani Nachalne – Choichito halnuparne are the lowest of the strata. They are considered the untouchables. If anyone of the higher caste touches them, they need to bath and change the holy thread. They are also considered as the Dalits.