Caves are interesting places to visit. The thrill and excitement one can experience inside a natural cave could be replaced by nothing else. The dark and steepness inside the cave add up to the thrill and attract people towards it. Darker the cave interesting is the tour. However, some of the natural caves are commercialized and used as a natural and cultural heritage to attract national as well as international tourists, which is not as dark as it naturally is because of the artificial lights used.

Some of the caves in the Illam district are mentioned below, 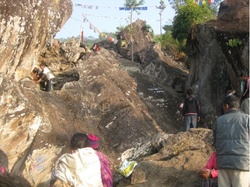 Located at an altitude of 5,000 ft. the Cave of Khandrung comprises of cabins of different shapes and sizes. The opening is wide enough for the human to enter with the exit holes opened at the peak of the hill.

The Cave of Pang

The Cave of Pang is situated at an altitude of 5,000 ft. lying amazingly at the distance of ten minutes walk from the its stone gateway with a black hole underneath. One can hear splashing sound of stones if thrown into it and the pond inside the cave holds many mysteries surrounding it in the area.

Situated at the distance of four hour walk from the Illam Bazaar is the Pushe Cave. It not only holds touristic significance but also holds religious importance as a temple of Siddhi Devi (a Hindu goddess) resides inside it.

The Cave of Evang

Surrounded by ponds, dense forest and the hills of Myangmalung, the Cave of Evang can be accessed from Bhedetar as well as Illam. The cave has a wide opening enough for the human to enter and it takes more than 30 minutes to walk from the opening of the cave to its end. It is said that the ruins of legendary Limbu kingdom are found in the premises of the cave.