Caves, for most of us, are the dark and deep places usually under the surface of the earth where dangers keep lurking around. We have seen caves in the movies and TV shows and only some of us have actually been to one of those steep and terrifying places. The movies and TV shows present caves as a home for vampires and batman, dangerous animals and snakes and sometimes as the source of historical and ancient remains. Well, the caves in the Kaski district in western Nepal are slightly different than those with a little exception of the bats resting inside. 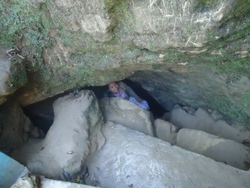 The caves in Pokhara are of historical and religious values and instead of seeing vampires or batman, one can observe the carving of gods and goddess by ancient people. These are opened for visitors and the tour inside the cave is one of the most exciting and thrilling experiences. There are four caves in Kaski district. They are:

10 minute drive from the central market place of the Pokhara city takes you to the place called Batulechaur where the Mahendra cave resides. The cave has been named after the Late King Mahendra Bir Bikram Shah Dev. It is also one of the most visited tourist destinations in Pokhara. The cave is a natural tunnel and is provided with the artificial lighting system for the ease of the visitors. The Mahendra cave is popular for its rock types and different stones that glitters when a beam of light strikes. This cave consists of big boulders of rock and the tunnels leading to different places like Kali Khola.

The Bat Cave is located at about 10 minutes walking distance from the Mahendra Cave towards the west. The cave is known as Chameru Gupha in the local language. This cave was discovered in 2040 BS. Although the entrance is narrow, the inside of the cave is wide and the inner walls are carved with the images of elephant tusk, gods and goddess. This cave is about 150 meter long and 25 feet high. There are no lights installed inside the cave but the visitors are provided with emergency lights and are accompanied by a guide as well. It got its name from the bats, around 15 thousand, nesting in this cave. Although the cave is wide, the path is quite narrow and steep and one has to take hold of the walls while walking to keep out from falling. The best feature of the cave is its narrow exit.

Situated at a distance of 2km from the Pokhara airport on the Siddhartha Highway, Gupteshwar Gupha is a sacred cave dedicated to Lord Shiva. Almost 3km in length, this cave has its entrance right across the Devi’s Fall. There are big hall-size rooms and some small passages where one has to craw on all four limbs. It is of great religious significance to the Hindu devotees for the phallic symbol of Lord Shiva is present here. Taking pictures inside the cave is prohibited.

This cave was discovered in the Armala VDC (7 km north of Pokhara) of Kaski district by Yam Bahadur Sunar and Graig. It got its name from the crystals found hanging down from the ceilings inside the cave. Through the length of the crystals, the history of the cave has been dated back to seven lakhs years before. Its major attractions are the highly priced crystal that measures about one centimeter in length, hanging down from its ceiling. Also, the walls of the caves have engraved statues of Gods and Goddess. It takes about 1 hour to tour around the cave.