Working actively since 2010, Child Reach Nepal was started with the aim of unlocking the potential of children currently studying in resource-poor schools in the rural regions of the country. The organization has been working actively since its inception to bring changes to various schools around the country. Before establishing in Nepal, it was initially started in a few high schools in the United Kingdom.

Dr. Tshering Lama who serves as the country co-coordinator of Child Reach Nepal states that visiting schools for the first time and trying to impart importance of practical and vocational education to both students and teachers. The organization has been doing what they can although most of the work they are doing should have been taken care of by the government. 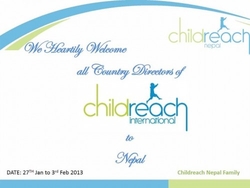 The organization has initiated a project ‘My School My Voice’ (MSMV) for the first time with the hope of making more headway of its objective and for this initiative, they have announced former Miss Nepal Malvika Subba. Under its ‘My School My Voice’ initiative, Child Reach Nepal, so far (2012), has 18 projects including a successful establishment of a library at Prabha School in Kavre and giving first aid training to students at the Yangrima School in Helambu. This school (Yangrima) had been demolished by Maoist cadres during the conflict era and Child Reach contributed to resurrecting the school so that it could be reopened for the students. Child Reach Nepal aims to connect children from rural areas to those from British High Schools as well as certain private institutions within the valley. Also, the children are involved actively in fund raising for the underprivileged children and the organization also facilitates interaction between children of different backgrounds.

The initiatives taken by Child Reach Nepal helps the children in the remote areas to express their creatively by providing them a platform as well as various opportunities.