Born on 14 April 1949 to Colonel Pratap Singh Gurung and Laxmi Gurung, Anuradha Koirala was brought up in a family that regarded providing services for humankind as the best form of dutiful work. She studied in Saint Joseph Convent School Kalimpong, India. At the school, the sisters further increased her devotion towards the social work. 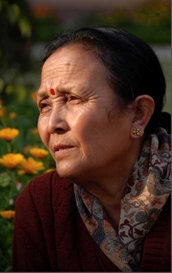 For more than twenty years, Anuradha Koirala taught English at various reputed schools of Kathmandu. During that time, children, girls and women were being trafficked within and from Nepal for commercial sexual exploitation. Then, in 1993 she founded Maiti Nepal with a vow to put an end to this heinous crime.

After establishing Maiti Nepal, she plunged into the service of humanity. Her first work was setting up of a rehabilitation home so that she could provide a home to those who have nowhere else to turn to. Now, Maiti Nepal has three prevention homes, nine transit homes, two hospices and a high school. More than one thousand children get direct services from Maiti Nepal every day.

So far, Anuradha Koirala has been provided 30 national and international awards in recognition of her courageous acts. She has also been honored with a lifetime achievement.  Some of the international awards includes German UNIFEM Prize 2007, Queen Sofia Silver Medal Award 2007, The Peace Abbey, Courage of Conscience  2006 etc. Her achievements include liberating twelve thousand girls from brothels and providing ART before the government of Nepal could initiate this process.

On 23rd September, 2010 Anuradha Koirala was selected as Top-10 CNN Heroes. On 25th November 2010 she was declared as CNN Hero of the year through global on line voting. Her victory as a CNN Hero is a pride and honor to the nation itself.