While most of the rural villages in Nepal are still beyond the reach of the electricity or telephone, the farmers in the rural village of Myagdi use the internet for business dealings of their live stocks and crops.

It is the courage and insight of one Nepali son who believed that the technology eases life and worked hard to link the rural village of Nangi which had no electricity, roads or telephone, with the wireless internet service. 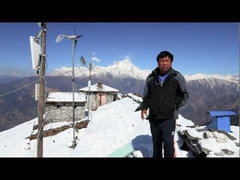 Mahabir Pun, a Nepali with an American college degree, won the prestigious Ramon Magsaysay Award in 2007 for his efforts. Struggling to muster up some financial resources, he conducted the transmission to bring internet in his village, which later proved to be successful not only there but also in the neighboring villages of Nepal. Gone were the days when one had to travel to Pokhara to send a message. He also helped to change the village school into a high school. Also the library and health posts were set up after that.

He contacted his old associates from his days in America and the BBC mentioning his desire and asking for ideas which later led to the donation of used computers, part and equipments from around the world. That is now installed in the library, school, communication center and health posts which has enabled the users to contact with the specialists in Pokhara through the internet for providing better health and educational services.

He believed that the contribution that the wireless internet technology has made to communication, education and health is testimony to the meaningfulness of his life. Although his family lives in Chitwan and Pokhara, he keeps wandering to the rural villages of Nepal.