Daal Puri is a traditional snack, a type of roti or paratha with daal used as fillings. It is one of the common snacks in the Terai region of Nepal and is popular among the people for its salty and spongy taste.

The process of making daal puri is given below:

1 and half tbsp ghee (clarified butter) or oil for cooking

2 Tej paat or the bay leaves

A pinch of Asafetida or hing

Boiled water for kneading (as required) 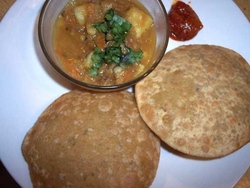 First of all, soak the daal in water for half an hour. After that, heat a cooking pan (or use a pressure cooker) and add oil or clarified butter to it. When the butter is heated, put the cumin seeds and let it turn dark. Then, add dried chilies and bay leaves and fry for few seconds. Now, add a pinch of hing and pour the chana daal on the cooker. Fry the daal for few minutes, add some water and press it. After two to three whistles, take out the daal and drain the remaining water making leaving it dry.

Now, take a large mixing bowl and put the rice flour into it. Add boiling water as required and knead it into soft dough. Then, when the dough is ready, make small dough balls out of it. Form the balls into a cup like structure and pour the daal fillings into it covering the ends. Now, flatten the balls using a rolling pin into a two inch diameter circle. Now, heat the oil in a tawa and fry the daal puri one by one until it turns light brown and looks crunchy. Serve it hot with chutney or even tea.

You can keep it for two to four days if you store it in open and airy place.