Dhido is a traditional Nepali cuisine prepared mostly in the hilly region of Nepal. This wheat pudding is considered to be healthy and is a common cuisine prepared mostly during the fast. Instead of wheat, some people also use corn flour or ground corn grains. People keeping fast often eat dhio because it is light but gratifying and also because it is long lasting as people do not feel hungry very soon after eating this. Although some might consider it tasteless due to lack of spices in it, people often love its original taste. It is also considered pure food to be eaten during the fast as it does not require salt or vegetable oil.

Besides being used as a food eaten during fasts, it also has various benefits for health. As it does not contain spices or oil, eating it in an empty stomach does not cause any harm and also the risks of being attacked by gastric or other stomach problems are reduced. Moreover, it also helps to solve the problem of constipation. Hence, this traditional Nepali cuisine not only minimal ingredients but is also beneficial for health. Cooking Dhido is a simple process that only requires two ingredients and some time and effort. 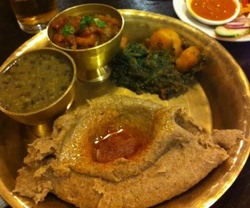 Here is how you cook dhido:

½ kg Wheat Flour (or corn flour if you want)

First of all, heat water in a deep pan and bring it to boil. After few minutes of boiling it, add the wheat flour and stir constantly. Do not let it form bubbles or knots and mix the flour thoroughly with the water. Stir constantly and let it simmer in medium heat. Do not stop stirring as that might result make the flour burn at the edges. Stir cook it until the water evaporates and a solid chunk is left at the end. The pudding changes its color to light brown. You will know your dhido is ready when the smell of the dish hits you. Serve it hot with achar or vegetable curry.