Who said there is no one to protect the right of the people in Nepal? Among the many corrupt or lazy police officers, there is one who is well known and famous for integrity and his fight against corruption within the Nepal Police Force. Such is the personality of Ramesh Kharel who served as a Senior Superintendent of Police (SSP) in Pokhara, Kathmandu and Birgunj. He has been transferred many times and his transfer from Kathmandu was a controversial decision which was likely delayed by public outcry and support for his stay.

He reduced crime in the city including the control of the gangs and the so-called “dons” of Kathmandu. He raided the dance clubs that illegally worked as brothels and also cracked down on illegal prostitution during his service in Pokhara. 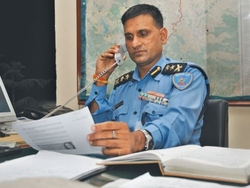 Even after his transfer in Birgunj, he continued his duties towards the public. The crime scene in Birgunj was down and the corruption in police force decreased within the first 10 days of his transfer. Also, the practice of taking illegal tolls from those who import goods from India was highly cut.

He took crime and criminals seriously and believed in punishing them despite the position they are in. He had even registered a murder charge against Prabhu Shah, Minister of Land Reforms of the then operating Government despite the pressure from his seniors. However, his efforts could not pay off as the District Attorney’s office in Parsa refused to prosecute the charge.

He is highly thought of and loved by all, the citizens as well as the press for his continuous efforts to perform his duties with respect and diligence. He not only gained popularity for reduction of crime from the city but also for his bravery for fulfilling his duty like jailing the son-in-law of the ex-king and firing corrupt subordinates without the fear of authority.

He has become an inspiration for all and an example for the government officials, policemen and all of those in administrative services. One should learn from his bravery and courageous efforts that if you really desire and work hard for it, you can fight against crime and bring peace to the place. He was one of the 16 SPs who were promoted to SSP in April 2012. He encourages everyone to fight against crimes and criminals and for seeking any help or for filing any complaints against unjust or illegal activities, he encourages everyone to contact him anytime on his mobile (9851078100).

With his courageous and fearless attitude and fight against corruption in the system, he has gained popularity and established himself as Singham and Rowdy Rathore of Nepal.