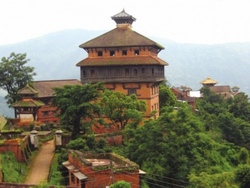 Located in the north west of Kathmandu valley, Nuwakot is one among the nine Kots that are Belkot, Dhuwakot, Dhaibungpot, Pyaskot, Bhairamkot, Malakot, Simalkot, Sallyankot and Kalikakot. Considered as one of the richest districts in terms of culture, history and nature, Nuwakot got its name from the common name of all nine kots (Navakot). The district is made cultivable by two holy rivers Trishuli and Tadi flowing through it. Nuwakot had also remained as the capital of Nepal for about 25 years during 1801 BS – 1825 BS. Some of the famous places to visit in this culturally and historically rich district are Rangamahal, Garad Ghar, Topkhana and Barudkhana. Also, the Trishuli and Devighat hydropower stations can be observed in this place. The district is bounded by Sindhupalchowk and Kathmandu in the east, Dhading and Rasuwa in the west, Rasuwa in the north and Dhading and Kathmandu in the south.

Falankhu, Linkhu Sumari, Salankhu, Siridhure, Tadi and Trishuli are some of the major rivers flowing through the district with Suryakunda, Chhaharekhda, Ripko and Phungphung as the major ponds and waterfalls in the area. Some of the famous and popular places that are also considered as the tourist destinations of the district are Trishuli Bazaar, Battarm Betrawati, Bidur, Devighat, Dupcheswar, Kakani, Nuwakot and Balche. One of the popular holiday and weekend destinations near Kathmandu, Nuwakot has diversified cultural and lingual practices such as Nepali, Tamang, Newari, Sherpa, Gurung, Maithali, Magar, Abadhi, Limbu and Rai. The district is also facilitated with medical, accommodation, communication and transportation facilities.