Dandibiyo, the national game of Nepal 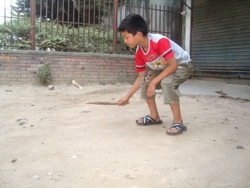 An outdoor game that every kid in Nepal knew how to play, though the rules varied from one place to another, Dandibiyo survived for generations. However, with the invention of new technologies and evolution of online and video games, people seem to have completely forgotten about the game in urban areas. The craze and love for the game over the period of time in the parts of the country has kind of made it a national game of Nepal.

There are two sticks, a dandi – long, strong and solid – and biyo, small, solid stick with two pointed ends. The biyo is a quarter size of the dandi. There are two groups, however, the number of players is not of concern as long as they are interested to play.

Similar to other games, it must be decided which team will bat first, hence, one of the players from each team needs to hit the either end of the biyo on the ground with the dandi. When the biyo flies up, they need to tap it with the dandi as many times as they can while it is still in the air. Whoever does this the most goes first.

This game is more or less similar to cricket where the batsman hits the ball and the fielders run to catch it. Well, the idea is to place the biyo crosswise across a small dugout in the ground. The dandi is used to flick it up while the other team facing the dugout tries to catch it. If they succeed, the person who flicked the biyo is considered to be out, however, if they can’t, then the distance from the trench to the biyo is measured by the length of the dandi to calculate the points.

Each member of the team gets a chance to hit the biyo three times, and tap it as many times as possible and then knock it far away. Farther the biyo, more are the points earned. If the dandi taps the biyo more than once, the points are multiplied and the distance is measured with the biyo. However, the player is not allowed to touch the biyo at any point. The target score is decided in advance and whoever reaches it first, is the winner.

It is an interesting game, very much popular during the 90s and still in the rural parts of Nepal, however, with the introduction of cricket (which is pretty much similar to it) and online and video games, playing this game is near to extinct. Also, the lack of proper place or the larger field to play is another reason for the loss of this game.

Dandibiyo is fun and exciting and every Nepal kid of 90s at least has one childhood memory of holding the dandi to tap and flick the biyo. All you need to play this game is a dandi, a biyo, a field and a desire in heart to have fun. Enjoy your game!