Danny Denzongpa, Nepali and Indian actor as well as singer

Born as Tshering Phintso ‘Danny’ Denzongpa on 25 February, 1948, Danny is a Nepali and Indian actor as well as singer. Born in the land of Gurkha (Sikkim) he is of Sikkimese ancestry and speaks Bhutia and Nepali as his mother tongue.

He has acted in numerous Hindi films and has also starred in some international projects, the most famous being Seven Years in Tibet. A noted actor for his villainous and character roles, he has also wrote and acted in the Nepali film Saino which was a super hit movie. This movie was also made in Hindi as television serial named Ajnabi for Doordarshan channel. He also sang the title song of the movie and a duet with Deepa Narayan, Udit Narayan’s wife. Beside this, he has also sung five songs with some of the leading singers like Asha Bhosle, Lata Mangeshkar, etc. The Nepali songs that he sang includes Aghi aghi topaiko gola, pachi pachi machinegun bharara, Hiun vanda chiso, aago vanda taato, Naachana hoi maichyan hau nachana, etc. All of his songs were hits and audiences liked them a lot and some of his songs are popular even today. 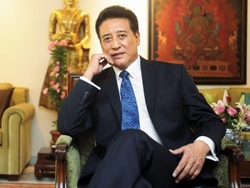 Also a sculptor, painter and writer, Danny owns three breweries in Sikkim, Orissa and Assam. In 2003, he was awarded the Padhma Shree which is India’s fourth highest civilian honor. He has also received many awards for his acting such as Filmfare Best Supporting Actor Award – Sanam Bewafa 1992, Filmfare Best Supporting Actor Award – Khuda Gawah 1993 and has been nominated for many of his roles, mostly the negative roles he performed. He is married to Gawa Denzongpa, Sikkimese princess and niece of the last Chogyal from Gangtok and has a son and a daughter.