The director of ‘Journey to Yarsa’ Deependra Bhandari had been a busy man traveling abroad for the screening of his movie. An explorer since childhood, he loved to climb to the top of the hill and when he reached there, he went for the higher one as he had been told that you can see many things from the top. One who was planning on doing a movie about the traditional hunters in Rukkum’s Maikot inside the Dhorpatan Hunting Reserve got the idea of doing a movie about Yarsa as he had to drop the previous story because of hunting being illegal.

He went to the location at three different trips for about three years while making the movie. When he had gone there for the first time, staying there for a month, the cost of a piece of Yarshagumba was two to three rupees. It was the time when he did most of the research and planning and during his second time, he trained some of the locals to carry the equipment and also chose characters Punimaya Kami and two other Magar families to focus on for the movie and he went there on his own for the third time to get ht final footage with Punimaya’s family. 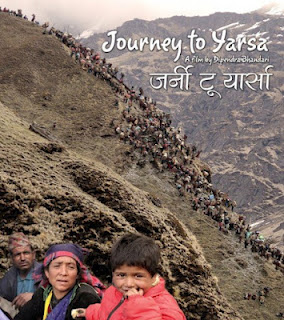 Making the movie was expensive as it had to be shot in one of the remotest part of the country and also because it was a one man project. As he was not satisfied with the footage he had, he made the third trip to focus on Punimaya and her family and although he had approached many friends and organizations including the NTB, UNICEF, he ended up using the savings and selling gold that his wife had set aside for their daughter. He did the audio as well as the video part on his own and also did not use a tripod to shoot which can be seen in the way movie is filmed.

The movie that has been a part of many film festivals in places like Al Jazeera, Toronto, Malaysia, Qatar and many other places would be undergoing post processing to made it for Film South Asia and also with the support Deependra Bhandari is getting, Journey to Yarsa might be remade for better.