Situated in the central region of Nepal, Dhanusha district has its headquarters in Janakpur, also known as Janakpur Dham or the Mithila nagari because of the presence of the famous Ram-Janaki temple here. Dhanusha district is one of the most popular pilgrimage destinations in Nepal for the Hindus as it is the land of birth of Sita, wife of Lord Ram and the structure that once was the palace of King Janak is now a temple known as Ram Mandir. Also, beside it is a temple where Ram is said to have wedded Sita and to this day, on the occasion of Bibaha Panchami, the marriage ceremony of Ram and Sita is conducted here every year.

The market is opened during Sundays and Tuesdays and usually during the religious festivals and cultural affairs, the place observes large number of devotees coming here. Also, the only railway station in Nepal connecting Nepal to India (Jaynagar in Bihar) is stationed at the eastern part of the district. It also has a temple (Janaki temple) which was built by the Queen Vrisha Bhanu Kumari of Tikamagadha in 1911 AD. Also, known as Sisa Mahal, the temple attracts throusands of Hindu devotees from Nepal and India to it on the occasion of Ram Nawami and Bibaha Panchamu. 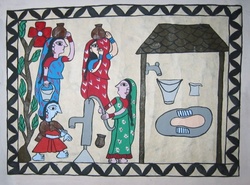 Dhanushadham is a historically and religiously important site dating back to the time of the great Hindu epic Ramayana that also reflects the long history of Nepali art and architecture. The holy pond of Parashuramkunda, previously known as Janak Sarobar, holds a historical as well as cultural significance for the people of Nepal. It is said that this is the same pond where Maharishi Parashuram had took a bath to quell his anger after his confrontation with Rama over the breaking of the sacred bow of Shiva. The pond with lotus flowers floating on it and lush green trees on the southern banks is a pleasant site to see.

Major rivers in the district are Bighee, Charnath, Gap Ghagar, Hardinath, Kamala, Rato, Bidhee, Sunjoree, Selar, Ghagar, Kol and Dugdhawati. The predominant culture and language practiced here is Maithali. Janakpurdham, Janaki Mandir, Ram Mandir, Chisapani, Mahendranagar, Gangasagar, Dhanussagar, Dugthawatee and Aaragaja are some of the major tourist attractions in the district. Janakpur, also known as Mithila Nagari, can be easily accessed by flight or bus from Kathmandu and is also connected to other parts of the country through bus services.