Dharahara or The Bhimsen Tower

Towering like a lighthouse over Kathmandu, the Bhimsen Tower or Dharahara was an edifice of architectural importance. Situated in Sundhara, it was a nine storey (50.2m) tall tower. People used to come from far and wide to climb the 213 steps just to catch glimpses of Kathmandu valley. It was built in 1832 AD by the then Prime Minister Bhimsen Thapa. 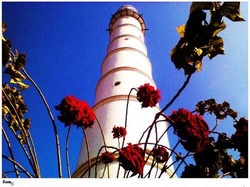 The tower had been built in Mughal and European style. Inside, spiral staircases led the way straight to the eight floor balcony. A Shiva shrine at the right at the top also used to give the tower a religious importance.

The original Bhimsen Tower was built in 1824 and was eleven storeys high, two storeys taller than Dharahara. The massive earthquake of 1834 caused severe damages to Bhimsen Tower. 100 years later, in January 15, 1934, another massive earthquake occurred and the structure was completely destroyed. Only two storeys remained. However, the then prime minister Juddha Shumsher renovated Dharahara to its new form which collapsed in the earthquake of April 25, 2015 with only the remainings of the base standing.

The tower was constructed for military purposes. It was used to keep an eye over the valley and to summon the people when urgent messages were to be delivered.

The tower was a major tourist attraction and was open to the public from 2005 until its collapse in 2015. The fare for entering the site and ascending the tower was set differently for locals, SAARC nations and foreigners.

In February 2016, the government decided to rebuild the monument once again with the contributions from Prime Minister K.P. Sharma Oli and his cabinet ministers, who contributed one month’s salary to the rebuilding. A fund called I will construct Dharahara was also established. The new tower is assured to be earthquake-resistant.