A home for elderly women and orphans in Kathmandu, Aama ko Ghar was established by Dil Shova Shrestha more than a decade ago. The home provides shelter to those who are less fortunate like the kids who have lost their mothers or the single elderly women left out by their family with no place to go. Dil Shova Shrestha had been married for twenty eight years with the love of her life and one day when her husband suddenly left her and their 16 year old daughter, she realized that most of the unfortunate elderly in Nepal are discarded from their family. She, then, came up with Aama ko Ghar, an organization that provides shelter and food to the single elderly women in Nepal who have nowhere else to go. 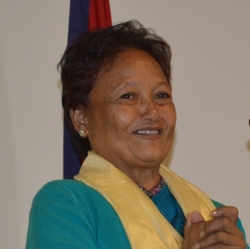 Shrestha, with her sister Rajya Gopali runs the home drawing inspiration from Mother Teresa. The Old Age Management and Social Welfare Trust was officially registered about a decade ago, almost four years after it was unofficially started. Set up in Kathmandu, it continues to provide home for the homeless elderly women with financial support from many organization (as well as individuals) including the Rotary Club, ARTUS (an association of the wives of pilots), the UN, the NIC Foundation (a Nepali bank), the Women’s Federation for World Peace and other international agencies. Shrestha’s daughter Sabnam, who lives in Chicago with her husband (a computer teacher), provides financial help to support her mother’s work (around $300 a month). The home that was originally established to support the elderly homeless women also accommodates and facilitates orphans children.

During her visit to Karnali, a northwestern city of Nepal which was very much affected by the civil war and still lacks many basic needs, she met orphans (whose parents were killed during the decade long civil war in Nepal) and simply couldn’t say no. From there, she brought 43 children (ages 4 to 13) to live in her home and with twenty elderly women already there. Although it was difficult, they had managed it. These children who had difficulties even getting basic necessities are now getting education as all of them go to school. This also helped the women emotionally as the women who had no families now had someone to call grandchildren.

She had started the old age home for elderly women by bringing home a couple of helpless old ladies from the street. At that time, she had thought that the rent amounts that came from two of apartments would suffice for the purpose. Now, however, all her apartments are occupied with the women and the children living there are each room has at least four beds that accommodate twenty eight women and forty seven children.