Something about Diya Maskey

Diya Maskey is a well known face in Nepali entertainment industries. Having worked on popular projects like Bhusan Dahal’s Kagbeni (movie) and Nabin Subba’s Dalan (teleserial), she has gained more popularity in short span of time. However, she is not an actor but a dancer and she would like herself to be called one. Since the beginning dancing has been her passion and acting came to her in later phase. However, having the privilege of being able to do acting for living is important to her and she don’t just turn up hoping for the best but really worry about it and do her homework, prepare herself for the character she would be playing.

Although her first movie Kagbeni did not fair very well and she was hurt, the experience and appreciation she got was enough encouragement she needed to build up her confidence in acting. Also a model by profession, she has worked in numerous music videos with Dilmaya of Yam Baral being her first. Taking the jump from music videos to movies was a huge step for her but with the famous names like Bhusan Dahal and Nabin Subba backing her up and Saugat Malla and Anup Baral supporting and improvising her, it was an experience that every actor in the industry would love to live. Although the roles in her movies and teleserials demand traditional and non-glamorous look, she is like any other young girl who loves to dress herself in contemporary clothes and look pretty. 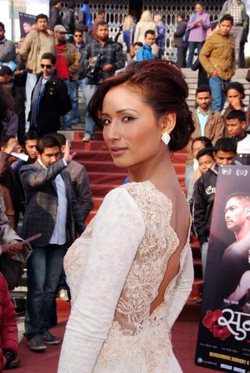 The real identity of Diya Maskey, according to her, would always be a dancer. This passionate dancer was called by Nabin Subba for Dalan after he watched her music video Bhijyo sirani raat ma. It was there that she had received training for sometimes, however, most of her works are done with her essence. And her experience of working behind the camera and in the music videos helped her make her way towards the movies easier.

Although she prefers exercising whenever she has time, dieting is a big NO to her. She is not a fitness freak or too conscious for her looks or weight and if not for her profession and career, she might not have considered going on regular work outs as well. Although she is open to endorsing brands, she is not a brand conscious person herself.