One of the Nepal’s number one Dj, Dj Raju needs no introduction. Lahanale Jurayo ki and I See You Baby was his first remix, however, he was recognized by his hit song Chyangba hoi Chyangba which can be heard in parties and discos since its release in 2006. He has also released his album Dj Raju 2.0 and has also worked as a dj instructor for a couple of years. 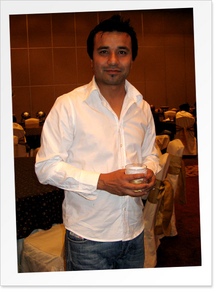 He was a drummer for a local metal band back in late 80s and during one of his visits to Europe, he had an opportunity to learn DJ. However, there were no places to learn Djing in Nepal back then. He, being an electronic gadget enthusiast, could not resist himself to learn the art of DJ. It is his hard work, belief and determination that has made him the pioneer of Djing in Nepal and he also feels successful in his personal life after meeting his wife so, his inspiration in his life has been his hard work, dedication and also his wife. His first remix song was a mixture of Lahanale Jurayo ki from the movie Darpan Chaya and I see you baby by Armand Van Halden which happened as an incident as he heard the songs in different stores at the same time while he was passing through New Road and he mixed them both in his head. He is never tired of playing his song Chyangba ho Chyanba as it is the song that gave him recognition among his audience. He loves and respects music and for him, music is something that no one can live without.

He was also a part of metal band during his teens and he would love to remix ‘rock’ music with ‘house’ music which is known as ‘mash up mix’. For being a successful DJ, practicing is a must and also one should be able to listen to and understand music. He considers the love and support he has received from his audience as best compliments he has received from his audience.