Dinbandhu Pokhrel is a household name in Nepal.  He has generated billions of rupees in donations to construct infrastructures like roads, schools, hospitals, canals, bridges, etc. by reciting the Bhagawat, one of the Holy books of the Hindus. His oratory skills encourage the rich as well as the poor to donate for the community projects. 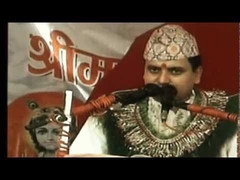 His family has been in priesthood for five generations and his father was the one who popularized the ceremonies like Yagya (holy fire offering) and the week-long Saptaha (recitation of the holy script) in larger communities. However, he was killed while giving religious discourse in 2005. His father started collecting donations and funds for building schools, colleges, hospitals and other development infrastructures by reciting Bhagawat and Yagyas. That encouraged Dinbandhu to take up the same profession of the generations despite the warning that he could face the same fate as his father.

He feels compassion for all, even the assassin of his father and wishes he would do good to others. Many people have donated millions of rupees, people of Surkhet donated land and 325 million rupees to build a public university. Lekhnath Municipality donated all their property and an elderly woman seeing the richness of in donating to charity donated her only ornament, her earring despite the resistance from her family.

He does not recite the Bhagawat for preaching the Hindu religion but to encourage people to donate for philanthropy. He has received donations not only from the Hindus and the riches but also the Muslim community in Nepalgunj donated two million rupees and a beggar donated RS. 1,200 for the welfare of the people.

He has already conducted over 92 Mahayagyas (holy fire offerings) in over 30 districts. He takes what he is given voluntarily to organize another Yagya and also gives salary to those who regularly assist him in making the Yagyas. The proceeds he collected through the Yagyas have already been used in building schools, colleges, roads and bridges while a hospital and a university are under construction (2010).