One of the best gynecologists in Nepal Dr. Bhola Rijal is a multi-talented personality. Besides being a doctor, he is also lyricist and director. The successful, yet, down-to-earth personality, Dr. Bhola Rijal likes to call himself a simple man.

Belonging to an educated family, he was exposed to education since the early stage of his life. His grandfather had moved from Dhankuta to Dharan and then to Biratnagar to provide education to his children and grandchildren. These were the times when there were no teachers in Nepal and those who were present, were all brought from Bihar. 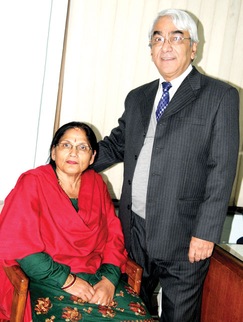 He completed SLC from Nepal and went to Banaras for I Sc. Then, he went to Dhaka for his MBBS and came to Nepal where he worked as medical officer for seven years before going back to Dhaka for his Post Graduation degree. There was an incident in his life which motivated him to become a doctor. During 2012 B.S, Itahari Bazaar was glazed by fire because of which many people were hurt. Others used to hesitate getting closer to the victims because of their wounds. He, however, used to take the medicines available and put it to their wounds. Others came to find out about it and started calling him ‘Chote Doctor’. This is what inspired him to get into the medical field.

He believes that success does not come easy and one needs to work hard to get it. His philosophy in life is to work hard and dedicatedly on whatever you are doing. It is not the work (profession) that makes you famous, but the way you do it. He advises all the aspirant doctors to be hard working and selfless. One of the most difficult and saddest cases in his career was that of one of his patients who lost life in front of him due to delay in blood transfusion.

One who considers his wife as his role model, for her support to him in achieving his position, Dr. Bhola Rijal is one of the most famous doctors practicing Om Nursing Home and Research Centre in Chabahil, Kathmandu.