Dumji festival of the Sherpa community

One of the greatest and very special festivals taking place in the Khumbu area during the month of May or June every year, Dumji is celebrated with much enthusiasm by the Sherpa community. Along with the serious rituals and dances performed by the monks, the festival is celebrated with dance, drinks and merry making to honor the anniversary of Guru Rinpoche’s birth on the lotus flower. 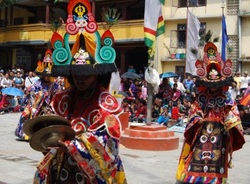 The first person to start the festival was Lama Sangwa Dorje, who is also the founder of the earliest monasteries of Khumbu region. He first started the festival in Pangboche about 360 years ago, in order to coincide it with the birth anniversary of Guru Rimpoche. The festival has both, the religious as well as community values. Every twenty year, it comes upon one family has to provide food and drink for the entire village during the celebration that lasts for four days. Each family, in turn, has to provide for the festival for the village which is quite costly and sometimes might result in bankruptcy. There are four laws to be chosen to undertake the responsibility of conducting the festival. It is performed by the Tengboche Monks in Tengboche, Namche Bazar, Khumjung and Pangboche of Khumbu and Junbesi of Solukhumbu. Among these, the festival in Namche is the most interesting and popular one. As the Tengboche Rinpoche might alter the schedule, depending upon the local events, the dates may vary by one or more days.

The first few days of the celebration are rather simple with just the local families visiting each other for food and entertainment. The festival is celebrated in all the Sherpa settlements during the month of MayorJune and also the Sherpas of Kathmandu and Helambu regions participate in dancing on this day. This being the time of monsoon, no other such festivals are celebrated, hence, it becomes one of the important festival of the month.

One of the major festivals of the Sherpa community, Dumji is celebrated with dancing, drinking and merry making along with rituals and dances by the monks.