Mha Puja, literally meaning self worship, is one of the important festivals of Newar community. During this festival, people from the Newar community worship themselves. It is performed so that the people will learn to understand and respect one’s existence and role in this world. There are certain essential elements required to perform the puja. Some of the important elements required during the Mha Puja are mentioned further in the article.

One of the most essential parts of Mha puja is Mandala. First of all, the floor is purified by sprinkling holy water collected from a sacred stream and the Madalas are created there in front of the row of seats for the family members. The total number of Mandalas depends upon the number of family members plus three extra. The smaller one at the top of the line is for the House-god. Then comes one each for the family members and the two at the end are for Yamaraj and Jamaraj, the envoy of death. It is used as a medium to present the various offerings to the self.

Itaa means the lights. These are hand-woven cotton strands soaked in oil and are about two and a half feet long. These are lighted at each end and offered to the one who is worshipped who accepts them by chanting mantras in Sanskrit. The locations of the four outer paddy/rice lumps in Mandala are occupied by the four lighted ends of the Itaa. The lights must be kept on until the puja is completed. The offering of the light signifies the strength of the self and makes one more powerful and keeps evil away.

Sagan refers to the offering made to a person during the puja and is an important aspect of the puja. Dhau (yogurt) is the first Sagan to be offered with blessings and it involves receiving a mixture of rice, taye, vermilion powder and yogurt, also known as Akshyata.

Next is the Khen Sagan which constitutes of the offering of Swataa which is the trio of egg, fish and meat on left hand and local wine on the right hand. It signifies one’s victory and control over animal beings living in cell, water and land. 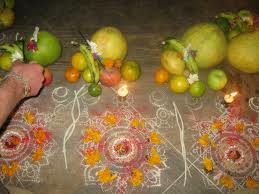 Flowers are the other essential elements of Mha Puja and the garland of ‘Gweswaan’ flower is worn around the neck by the worshiper. It signifies long and successful life. Jajanka which is made of many rounds of white cotton thread forming circle about two feet in diameter and tied with a small piece of red cloth in order to have no ends is used as a garland by the worshiper. It symbolizes the integration of the beginning with the end.

Variety of fruits, nuts and sweets are offered with a wish for fruitful and resourceful life. Walnut, Tahsi fruit, Singali (local chestnut), sugarcane are some of the fruits and nuts offered during the puja. The quality and characteristics of these fruits also denotes the relationship of human with nature. Also, the sweets shaped like star, moon, etc. are offered in the puja. The envoys of death, Yamaraj and Jamaraj are believed to be observing the puja and it is said that because of the physical and spiritual energy gained through various offerings, they are kept away. It is said that these two could not even touch the person who has performed the puja until the shell of the walnut rots, which is considered to be quite impossible.

Nakin or Purohit gives the shower of a mixture of paddy, flower, pieces of fruits, abhir (vermilion powder), aakhen (hand-milled rice) and taye in a kule (wodden or bronze container about half a gallon size) to the worshipper’s head. The puja is completed only after the Nakin drags the tuphi (local broom) from the House-God’s Mandala to the Jamaraj’s Mandala. Hence, Nakin is also essential for the Mha Puja.