The Family of Shooters in Nepal

Gharbari in Nepalgunj is home to a family of shooters. The family whose first member started out more than two decades ago has won many national and international level medals and the family is famous for the sport of shooting.

One among this family of shooters is Parvati Thapa, the first woman to enter the Olympics, who participated in 24th Olympic Games held in South Korea in 1988. She was chosen to represent Nepal at the Olympics after she reached the finals at China’s Asian Shooting Championship in 1987. She has competed in five world cups, 13 Asian and South Asian competitions in shooting and has won one gold and one bronze medal. She has won 16 gold, six silver and one bronze medal in national level. She desires to create a new champion in this sport while she works as a shooting instructor. 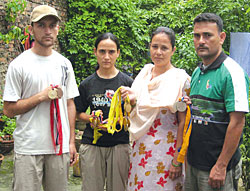 She knew nothing about the sport when she first started it but her elder brother Laxman Thapa forced her to take it up and after a year of exercising, she entered into a shooting championship held in honor of the then queen’s birthday in 1985 and came second. Her brother had participated in the 10th Asian Games, Asian Championship and the World Cup. This is how her career began.

Her younger brother Narendra used to watch her and her elder brother shoot and got interested in the game. He was selected for the 1988 national championships and since then, he has competed in every national and open championship and has won four gold, two silver and one bronze medal. He also participated in the 11th Asian Games, the 5th, 6th and 8th SAF games and the 2nd SAF shooting championships where he won a bronze medal.

Very soon, the craze of the game took over the interest of the family members and every siblings of the family got interested and involved in the game. Their younger sister Krishna Thapa also gave up her football career and joined shooting although she was the captain of the mid-western football team. Her hard-work and practice paid off in 1992 when she participated in the national sports championships. She has won two gold, two silver and one bronze medal on the national level and two silver medals in the 2nd SAF shooting championships. She has also taken up teaching shooting as an assistant instructor.

Anita Shrestha, also related to the family as a niece to Narendra by relation, is the first Nepali woman to win a gold medal in the SAF games. At the 5th SAF games, she won an individual gold and a team silver medal. She has participated in a lot of national and international competitions, including Olympics and the shooting world cup since her career began in 1988.

Asha Thapa (Bista), also the member of the same family, is Laxman’s sister and the winner of national level medals who also participated in the 6th Asian Championships. Moreover, Sanjog Krishna Shrestha and Madhvi Shrestha are the new generation shooters who are ready to participate in the national level championships. The glory and attention the family has attracted has made people willing to be the honorary members of the family. Because of this, Upendra Thapa, winner of three bronze medals in internationals and 14 gold in nationals and the international shooter Keshav Pratap Singh have become the honorary ‘sons’ of the Thapa family, the relation which is bounded by shooting.

While all others shoot with an air rifle, Upendra, Krishna and Madhvi use an air pistol. Although the family has contributed a lot in the field of shooting, their contributions have not been so much as recognized. Parvati was made an instructor but other’s contributions remain to be acknowledged.

This family of shooters have contributed a lot in the sport and helped Nepal to gain recognition worldwide in this field. It is their hard work and dedication that has made Nepal able to brag medals in the sport, at international level, which has been dimmed and not highly recognized.