Festival for the goddess of wealth

One of the popular and important Hindu festivals of Nepal is the festival of Laxmi puja that falls on the third day of Tihar, the festival of lights. Also, it is one of the most important aspects of Tihar as Laxmi puja is often taken as synonym of Tihar and also the major celebration of the festival is done on this day with lights, rangolis, and sweet delicacies not to forget the worship of goddess Lamxi, the goddess of wealth.

According to the legends, goddess Laxmi is believed to roam the earth on the day of Laxmi puja and people applies all their efforts to make sure that the goddess stays at their homes for the whole year. It is believed that the goddess only enters the house that is pure, clean and bright, hence, every family in Nepal goes on home cleaning spree days before the festival starts. They also decorate their houses and puja room with colorful papers, clothes, flowers and lights to catch the attention of the goddess. Some decorate their entrance gate with lights, flowers and fully grown banana trees planted right in front of the gate to catch the attention of the goddess. While some also makes a colorful and artistic rangoli, others draw footsteps right from the main gate to the prayer room so that the goddess will know exactly where to go. 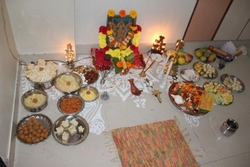 Each corner of the house is illuminated with butter lamps, wick lamps and candles and nowadays, electrical lights are also used to brighten the house giving artistic and beautiful look with the lights that are available in various designs.

The Hindu mythology mentions that a demon king named Bali became so powerful that he posed a threat to the celestial deities and their kingdoms. Then, Lord Vishnu took the form of a dwarf monk Vamana and arrived at the door of Bali wisely making Bali grant him as much land as he could cover in three steps. As the king saw no harm in that, he agreed to grant him the wish, however, the Vamana avatar of Vishnu then, grew in such a big size that he covered the heaven and the whole earth in his first two steps and had nothing left in the whole universe to step on for his third step. Bali, then realizing that it was Lord Vishnu himself, he offered his own head to the Lord’s third step. Vishnu pushed him into the nether world with his foot and in return gave him the ‘lamp of knowledge’ to light up the dark underworld along with a blessing that he would return to his people once a year to light millions of lamps from his lamp and dispel the blinding darkness of ignorance, greed, jealously, lust, anger, ego and laziness with the radiance of knowledge, wisdom and friendship. This is why people light up all the lamps in the house during this festival using just one lamp as a representation of king Bali’s lamp of knowledge signifying ‘the awareness of inner light’.

There is also another myth which states that the festival is celebrated to mark Lord Rama’s return to his kingdom Ayodhya after completing his 14 year exile and as he had returned home after defeating Ravan, the king of demons, Rama was welcomed by his people with the illumination, fireworks, joy and festivity. Even to this day, after worshipping the goddess of wealth, goddess Laxmi, people enjoy delicacies of sweets and sel rotis and celebrate the victory of diving over evil with fireworks and joy.