The festival of Matya in Patan

A typical Buddhist festival of Nepal celebrated on the third day of the dark fortnight of Shrawan (August), Matya begins early in the morning and although the word Matya means ‘the festival of lights’, it is quite different from the festival of Deepawali or Tihar.

During this festival, a long parade of the enthusiastic shrine-walkers goes around all the Buddhistshrines scattered in and around the city of Patan which is rather fascinating because there are more than 1300 Buddhist shrines in Patan alone. The shrine-walkers who participate are around three to four thousands and consist of both, men and women who carry variety of gifts to offer to Lord Buddha. The offering consists mostly of rice, grains, flowers, red powders, sweets, incense and guru patra (a gift cup for guru), however, offering oil or butter lamps to the Lord on this day is most dominant. It is believed that offering the lamps in particular to the Buddha on this day signifies great enlightenment obtained by overcoming the Maras (temptations). 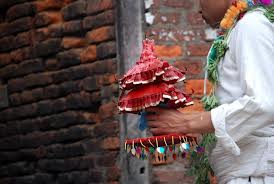 According to the legend, once a Sakya Muni Gautam was in deep penance to attain Nirvana when the jealous Maras came to distract him. They disguised themselves in various forms and some were in the form of fierce-looking demons while some in form of beautiful damsels. They tried a lot to tempt the muni but he overcame the maras and became Buddha, the enlightened one. It is also believed that the Maras later came to Lord Buddha and confessed their sins and worshiped the lord with great honor which marked the origin of this festival.

On this day, during the parade, people disguise themselves as devil dancers, damsels and other funny mask-wearers who are said to represent the Maras. The parade is accompanied by several groups of musicians playing various kinds of tradition musical instruments and the parade moves in an unbroken chain. The seven to eight hours long parade is guided by the musicians at the front.

In every ten years, one neighborhood gets the responsibility of organizing the parade and for that the sponsoring tole of the parade must train a team of traditional drummers to play on this day. The team of the drummers is known as Naubaja Khalah and they perform the show in a very special way only at the member toles which celebrated the festival.

Also, the funny and devil dancers try to scare the kids away whenever they come across those curious ones, some kids are scared away while others join the group and tease them instead. The festival holds great significance for the Buddhists as it represents the day when the Maras surrendered to Lord Buddha, a greatest achievement according to the Buddhist religion.