Rakshya Singh Rana is the first female film editor of Nepal. She has also tried her hands in direction with her directorial debut “The Game”. It made her second female director in Nepali movie industry, however, she likes to call herself an editor. 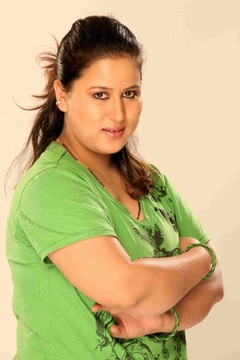 She started her career as an editor at the age of 18 and her first project was editing the TV program “Cinelahar”. She was very proud and happy seeing her name first time as an editor in TV and in excitement, she often made her family and close friends read the name repeatedly. She was always interested in the technical field which encouraged her to join as a video editor in the Nepali film industry. She started her movie editing career with the movie “Ijaat” and she has edited more than two dozen movies to date (2011).

Her movie “The Game” did an ok business although she received good response for the direction part. She doesn’t like the way Nepali movies are compared to the Hindi movies because the lack of budget and the less number of audience is a hindrance in producing good movies in Nepal.

She is married to the actor Bal Narsingh Rana and is a mother of a beautiful daughter. Being a female editor, she wishes there were many other female editors as well in this industry. She believes that if a person is determinant and hardworking, everyone has to acknowledge her/him and no one could dominate them, not for a long time and they will definitely taste success.