The first Nepali woman mountineer to scale the highest peak of the world in April, 1993, was Pasang Lhamu Sherpa. Born on 10th December 1961 in Sukre, Sherpa was an example of courageous and determinant Nepali woman. Before her, only one woman (Junko Tabei of Japan) had scaled the Everest. 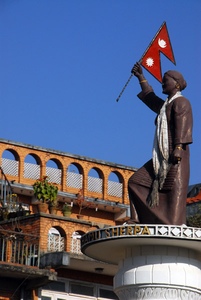 She attempted to scale the Everest three times before she finally succeeded on her fourth attempt. She had also successfully climbed Mount Pisang (6091m) in Nepal in 1989. In 1990, she became the first woman mountaineer to climb the famous Mt. Blank (4848m) in France. In the same year, she made her first attempt to climb Mt. Everest (8848m) but managed to reach only 8000m. In 1991, she scaled the Yala Peak (5,800) and attempted to scale Everest for the second and third time but reached only 8750m and 8500m, respectively. Then in 1993, she made her successful attempt to scale the mountain with four others, Sonam Tshering Sherpa, Lhakpa Noru Sherpa, Pemba Dorje Sherpa and Dawa Tashi Sherpa. However, during the decent she lost her life due to the bad weather conditions.

She had received many honors and recognitions from the Government for achieving what no other Nepali woman had achieved. She was the first woman to be declared as the Nepal Star or ‘Rastriya Bibhuti’ by Late King Birendra. The National Youth Foundation bestowed her with the 1993-94 Youth Excellence Award. The government renamed the Jasamba Himal (7,315m) in Mahalangur Range as PasangLhamu Peak, the 117km Trisuli-Dunche road was renamed as Pasang Lhamu Highway. Postage stamps were issued with her photograph, in her honor, also the Pasang Lhamu Memorial Hall was constucted in Dhulabari of Jhapa district. Similarly, her life-size statue is erected at Boudha, Chuchepati in Kathmandu in order to celebrate her feat and the Ministry of Agriculture also named a special strain of wheat as Pasang Lhamu wheat.

Her plans to use her success to help ease the pain and hardship of her people is still alive and working in the form of Pasang Lhamu Mountaineering Foundation that was established in 1993 as a non-profit, social, national organization with a goal to educate and train the Nepali women in order to protect their rights and interest and provide them health facilities, legal facilities and social securities.