Born on 19 January, 1984, Nepali footballer Sagar Thapa made his first appearance for the Nepal National football team in 2003. The skipper and also the captain of Nepali football team got instant fame when he scored once-in-a-life-time goal in the 95th minute against Bangladesh in the South Asian Football Federation (SAFF) Championship 2011. 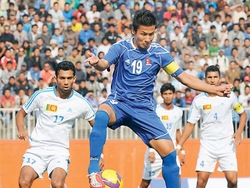 His goal hit the top left corner of the net and the goal was considered legendary as it was said that such a goal was scored only by Ronaldino in the World Cup 2002 finals and on one else since then. The goal not only got him fame but also won his team the match by taking the Nepali team to the semi-final of the tournament. The game ended with Thapa scoring this goal and winning the match by 1-0. The winning match for Nepal against Bangladesh, which happened after eighteen years, was played at the Jawaharlal Nehru Stadium in New Delhi. It was an important goal as the Nepali team had not scored a single goal in their two matches in the SAFF Championship. His goal also got him the title ‘Player of the Week’ in the famous football website ‘Goal.com’.

He was also honored by the Yeti Himalayan Sherpa Club at the DECC Hall, Tripureshwor, Kathmandu, for his spectacular goal. Not only that, he also received cash prize of Rs 1 lakh from Mega Bank CEO Anil Shah and fifty thousand rupees from the Government of Nepal for his goal. His goal not only earned him and his team a historical victory in the SAFF Championship in 2011 but also earned him fame and cash prizes. His fame and popularity was not only limited to his nation or the neighboring nations but the entire world watched his performance as the video of him scoring the goal was one of the most viewed YouTube videos and it was on top for many weeks with large number of viewers.